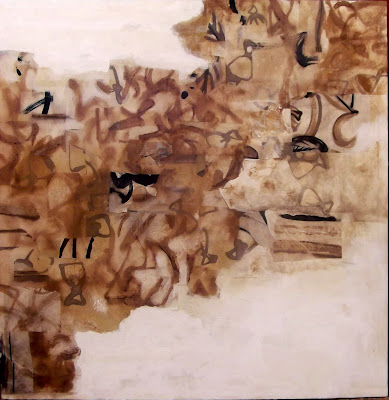 Réclamation: Pavage, Déchées, Pavage et la Terre 1 (aka Pavement or Pavage) dust, earth, charcoal, ink and glue on canvas, 39x39"/1x1m
fini 28 Janvier 2011 – represents my first responses to the contradictions of putting my feet on African soil for the first time and experiencing the city's streets « paved » in dust, plastic bags and bottles, all the beauty pushed to the periphery. The small plastic sacs that hold ginger, bissap and mango juices (beautiful shades of beige, majenta and orange) are dropped or tossed aside to become crushed and beige in the streets, becoming paving for the foot trafic of daily life. 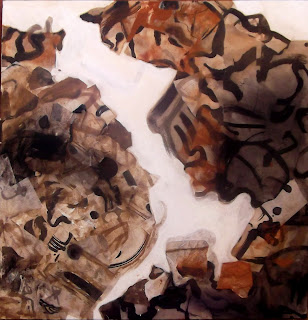 Réclamation: Pavage, Déchées, Pavage et la Terre 2 (aka Ground Detritus) dust, earth, charcoal, ink and glue on canvas, 39x39"/1x1m
fini 30 Janvier 2011 – a geographic or cartographic view of the struggle between the earth and pollution, a river separates two active states of being in Mali – the richness of the Mali's ressources (both natural and human-made) and the constant threat of pollution – representing the shock of seeing a beautiful countryside along the river dotted with trees filled with birds that later turned out to be flocks of black plastic bags, and the emotional struggle to deal with last week's thefts from the atelier that incorporated cultural, ethical and personal paradigms. 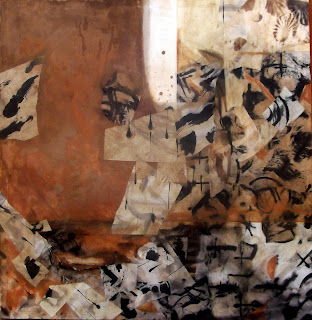 Réclamation: Pavage, Déchées, Pavage et la Terre #3 (aka Optimism of Disorder ou l'Optimisme de Désordre) dust, earth, charcoal, ink and glue on canvas, 39x39"/1x1m
fini 1 Fevrier 2011 – referencing earth-bricked and earth-surfaced architecture of Segou/Mali as it encounters the trash of daily living, this piece represents in a way an optimism in the apparent disorder in the swirl of trash, activity, ambition and negligence, vision and impatience. 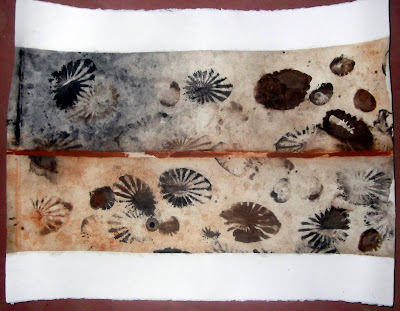 
Friday, 28 jan 2011 - Pavage, Déchées et la Terre = Réclamation
It came to me in the morning – the approach to the sketchmark/quiltbearings in this workshop. It is a paving, a covering over of the earth with the contrived and incidental (sketches and drawings torn up and reassembled as paving – referencing as I have been wanting to do – the “paving” of the streets of Bamako and Segou with plastic bags and bottles. (small bags which hold juice frozen into glaces or Popsicles) (larger black bags which hold the French bread/pain everyone eats every morning, the fabric/tissue, souvenirs and groceries we buy throughout the day, the bottles which hold the uncontaminated mineral water tourists and the affluent enough buy to drink and others sell).

As I envisioned the compositional approach, worrying about the references to architecture and how to use the available materials – charcoal, red soil, yellow dust, brown millet ink, leaf dyes and bogolon/mud... I realized that my attraction to what was beneath my feet, the ground I put my feet upon, everyone puts their feet upon all day every day here Mali is also the connection to the ground, the earth, the soil of Richmond.

In the group discussion yesterday the many interpretations of what the earth can mean to each of us in the workshop is also what will inform any cohesion and when death was mentioned it hit me that I already had all the elements I needed to move the work forward, except composition. So it was this morning's musings that brought it all together. I walk the ground here – the ground here is “paved” with the detritus/déchés of modern life, a modern life that is struggling (making progress) to free itself from the under-development of 100 years of colonial control.

In Richmond we are struggling to reclaim a burial ground tossed aside to become speculation property as soon as it was filled up with bodies of slaves, free blacks, hanged unfortunates and criminals, and paupers of all kinds with no land of their own in which to be respectfully and traditionally buried. This site is paved with asphalt, it is a parking lot – there is no respect for the dead nor for the lives lived in the bodies that were interred there 200-300 years ago. The struggle to reclaim it has come through the justification of the right of the African American community to self-determine NOW the reclamation of this precious cultural site.

As contemporary Africans work to "modernize", to use their impatience and resourcefulness to move themselves into the 22nd century of technology, information and development, their pavement gives evidence of a peoples' reclamation of its own processes and the ways in which it declares to itself and others, insiders and outsiders, how its going – good, bad and otherwise.
Posted by Our Rosewood at 8:29 AM

To invest in the art, put a deposit on a commission or buy an existing work, please use this Paypal link: paypal.me/afedwards

Want to order something?